Where to watch animals in Panama 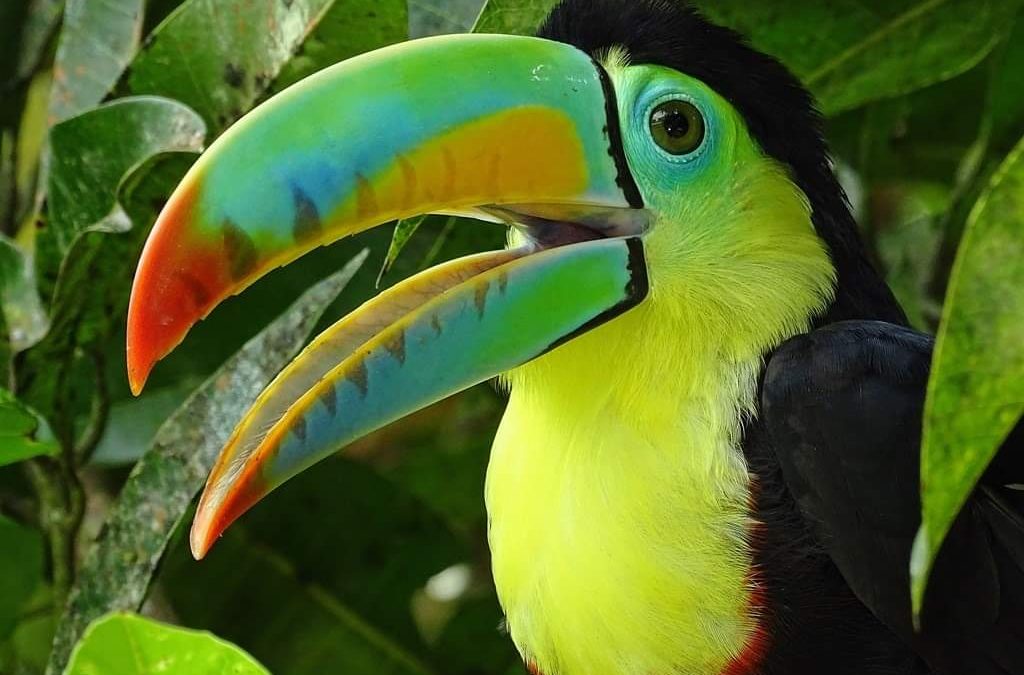 — where to watch animals and sea life in Panama ?

You book a trip to Panama but you don’t know where to watch animals, which place to go for admire nature, which eco-lodge to sleep, what you can expect ?

In this article you will discover :

Why panama rainforest have so much different animal species?

We can’t speak about Panama Biodiversity without speaking about the jungle, rainforest is one of the richest place to visit on earth. The panama rainforest is:

Return to the past:

15 million years ago, water covered all Panama. America was separated by the sea. The Pacific and the Atlantic oceans was only one.

But under the ocean, two Earth’s plates meets, so, the Pacific plate dive below the Caribbean one, and create formation of volcanoes. it s what we call today the Caribbean. This big change result to the emergence of beautiful new countries, like Panama, Costa Rica… So, animals migrate from north to south and inverse. They finally were stocked with the mountain formation. Also the climate help them to reproduce easily and the equatorial jungle is the perfect environment and temperature for favorited life.

So, equatorial rainforest offer the perfect home for all species, and they love it! It s why Panama, Costa Rica and Colombia have a so rich varieties of birds, fishes, insects, and mammals. You can find here some species unic in the world and almost all kind of existing turtles. Let’s make a little turn of the most popular species of the area.

if you want to read more. About the extraordinary Panamanian biodiversity  we suggest you to visit the biodiversity museum in Panama city

With almost a thousand of different varieties of birds Panama is one of the most diversified place on the world. For all birds lovers this is THE place to go. Some varieties are really simple to approach like Toucans, Parrots, Hummingbirds. If you want to discover more birds you can visit the Nacional Soberanía park, where you can find more than 500 different varieties of birds. Isla Bastimentos it s also a very good spot for birds watchers, Tranquilo Bay is a popular spot, with a 25m observation tower and guides to explain you about the different species. There is a eco lodge where you can pass few days watching beautiful birds species, it will cost you around $175 day to access the place, if you have a smaller budget we suggest to visit Republica Pachamama it s also an eco lodge based on the rainforest, with the 320 000 km2 of the property you can easily see a lot of beautiful birds, it will cost you around $25 day

— where to dive in Panama ?

You can dive into two different oceans in one day and admire two completely different underwater varieties of fishes in the cold waters of the pacific or in the warm tropical temperatures of the Caribbean.

Humpback whales, reef sharks and perhaps killer whales are frequently mentioned in the dive logs of the Coiba Marine Park. Peak periods for these sightings are between August and September. If you want to dive, it is possible to list at least a dozen diving sites in Panama. Indeed, it’s a whole variety of scuba diving spots. We suggest : San Blas islands where you can find a large selection of scuba diving spot. Bocas del Toro Islands is a good place for diving around corals. Archipelago of Las Perlas, located on the Pacific Ocean side of Panama is also a good place to go, even if it s more quiet for beginners to dive on the Caribbean side (Pacific side have strong currents) the more experienced can do there some drift diving there. Whales and many other pelagics are frequently encountered on the Las Perlas archipelago.

You can also discover in Panama five of the seven species of marine turtles in the world!!!  They can be seen on both coasts, including the Beautiful San Blas islands on the caribbean side, or the Chiriquí Golf on the Pacific side. Seeing these creatures leave the ocean to lay their eggs in the sand is an unforgettable experience. You can watch this spectacle from 6 different beaches, between July and November (we suggest Playa Bluff, Playa Malena and Isla Cañas to see them)

— where to see monkeys in Panama ?

There is 7 different species of monkeys living in Panama, we suggest you to have a visit of monkey island, located on the middle of the lac few kilometers of Colon, you will discover by boat the monkey islands , most of the monkeys are  Capuchins, they jump on the boat, eat in your hands and love mangos. It s a funny activity to add on your Panama trip, it will cost you approximately $70 for the half day trip, Capuchins are really smart monkeys, a New Scientist article report a hardly believable sighting: on Panama, a group of Capuchins discovered that stones could be used as a tool and teach the practice to the younger ones. It is the fourth group of primates to enter the Stone Age… like the human in the past. Darwin’s theory of evolution in action. For the full list of Panamanian monkeys to see here is the wikipedia list of them.

— where tO watch animals in Panama ?

You have to get away from the capital, close of the Colombian border to discover the wilde and large Darian national park. It has been declared World Heritage Site and Biosphere Reserve by UNESCO. In this equatorial jungle live many species, but also Indian tribes who have been able to preserve their habitat and culture. It is recommended to be accompanied to explore this park. Especially cause of jaguars, capybaras or reptiles walk quietly in freedom! It will cost you approximately $ 450 per person for 3 days and 2 nights with a guide in the jungle. if it s above your budget you can also visit a jungle eco lodge where you can also admire the wilderness, we suggest republica Pachamama which offers very interesting prices (75 $ for 3 days) to enjoy the property 32 acres of equatorial jungle.

If you need more informations about all different species you can meet. Click the link below for a complete list.

Capybara is a kind of cute mix between a pig and a big rat, they can weigh up to 70kg and love water, they bases their survival on an surprising social cohesion: in a group made up of twenty animals (three to four males, six to eight females and the young), the youngs of diverse ages are watching by one of the adults, male or female. This “kindergarden” allows parents to bath, eat or coat themselves with mud without too much risk for their little ones. It is also normal that a lactating female feed all the young of the same group. The male who marks his territory leads the group.

— why insects are essential ?

With 2.5 million species insects, (half of the mundial species) panama is a really good place to admire biodiversity,  most of the people don’t like them but they are a full part of nature.

Insects are constantly evolving, we will never know their exact number. If all the insects on the planet were together, they would weigh heavier than all human kind. indeed, it is estimated that their total biomass would be 300 times biggers than ours. These are of course only estimates in the absence of reliable data, the measurements of the biomass of insects remain questionable. What is known, is that insects are characterized by three pairs of legs, two pairs of wings (sometimes tiny or absent) and a body divided into three segments: head, thorax and abdomen. Another common point: they change their appearance during their development during a process called metamorphosis. We also know than life would be different if the insects did not exist. Without the insects, our food resources would be terribly reduced: without these formidable pollinators, our agricultural development would have been compromised and some products, such as silk and honey, simply would not exist. With very little fresh fruit and vegetables at our disposal, we would suffer from many deficiencies. And human kind will be in danger. So don’t be to much afraid of them and remember finally the most dangerous animal in the world for humans is the mosquito.

Our Top 5 Nature activities to To do in Panama

Take 3 days to visit the darien national park, with a guide you will discover the beauty of jungle, the biodiversity of the rainforest and meet the amerindian tribe living there. Okay! It s a budget ($450 for 3 days) and it’s really not easy to reach but it also a really greet adventure!  More informations.

here you can’t hire a guide (so, don’t go too far into the jungle) but you will find in Republica Pachamama a bunch of happy volunteers who are always really happy to receive visitors on their little paradise. it’s not the most comfortable place: No electricity into the bedrooms, No hot water but instead nice commun room built with natural materials on 32 acres of rainforest, also, waterfalls inside the property, jungle view from the cabanas beds, friendly atmosphere and really fair prices ($75 for 3 days). It s a really complet place to discover the Panamanian wildlife, but definitively not for peaky persons. More informations

Between Colon and Panama city, this affordable park (5$) is a good place to hike safety and discover wildlife, and a lot of birds!!!!  only problem: some animals are in cage and we will prefer to have them free. More informations

A good way to discover sea wildlife is by boat, of course if you go to Panama on August you can see  the beautiful spectacle of turtle nesting from the beach, but this is not the best part of the year to visit Panama. If you want take time to admire sea creature the best is to take a boat, and for few days have time to discover sea life at your rhythm.

You can do some drift diving on the pacific cost, some diving in Boca del Toro or fantastic snorkeling on shallow turquoise water cruising around the San Blas islands

Those monkeys are not shy at all!!! Go by boat and have fun. The monkeys climb the boat eat in your hands. Meet those cute little thiefs and come back with beautiful memories and nice pics. More informations

Birth and Nursing of the Dolphin

How do dolphins reproduce? Do dolphins breastfeed? How are baby dolphins born? Dolphins are polygamous mammals, which like bonobos and humans enjoy having sex outside of breeding. The mating is done vertically, belly to belly, lasts about thirty seconds and looks like...

Adventure You want Adventure? You want some vacations to keep in memory for ever? You are probably looking for something different from the usual Panama tours trips. We have the ultimate adventurous travel sail trip Of course it's nice to appreciate a classical...